Skip to content
No Comments on MURCIA SOS 4.8 2012 MUSIC FESTIVAL REVIEWPosted in 2012, FESTIVAL, FRIDAY, FRIENDLY FIRES, GOSSIP, KIKO VENENO, MAYO, MURCIA, NACHO VEGAS, PULP, REVIEW, SOS 4.8, THE KILLS, THE MAGNETIC FIELDS, VIERNES By adminPosted on May 5, 2012
This was the fifth year for Murcia SOS 4.8 Music Festival.
FRIDAY
The band to start the fest was Perro, at Escenario Jägermeister stage. The second stage as far as size and public are concerned (as well as popularity, but not necessarily quality) gave way to local band Analogic that got onstage in second place.
Opening Auditorio Mondosonoro.commusic hall stage, from Boston, Massachusetts, The Magnetic Fields offered a concert introspectively focused, with lack of hits but generally enjoyed by the attendees. The hall had no vacant. 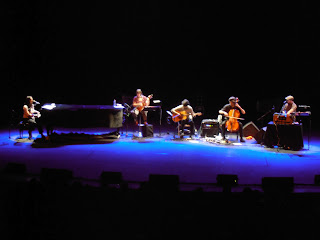 At the same time, Asturian songwriter Nacho Vegas warmed-up main stage Escenario Estrella Levante. He had a number of followers that received his thanks for being loyal to him whilst the king of pop (in his opinion Stephin Merritt, leader of The Magnetic Fields) was playing a few yards far. 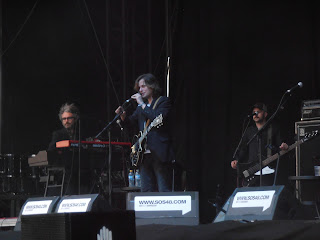 After having a very quick look at La Estrella de David on the second stage, we got back to the main stage with The Kills. They played surrounded by four percussionists that made some of us think of Kraftwerk up there with such robotic movements, but they had more visual presence than the actual role they had for the sound. The guitars, on the other hand, were really vehement and strong in songs such as Heart Is a Beating Drum, Kissy Kissy, Fuck the People andMonkey 23, the one they chose to say goodbye. 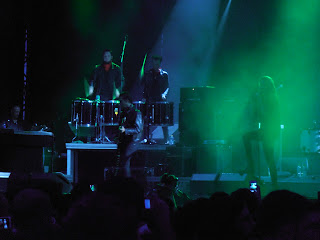 Watching Hidrogenesse in the music hall or The New Raemon on the second stage was virtually imposible…
The reason was that it was the turn Friendly Fires on the main stage. The british disco funk band and specially frontman Ed Macfarlane danced and made everyone dance in a concert that brought us their sound in songs like Hurting, Hawaiian Air and Kiss Of Live. Too much of electronic samples, synthesizers, … well, that is their sound, but from time to time we though guitarist Jack Savidge could get offstage and no one would notice. 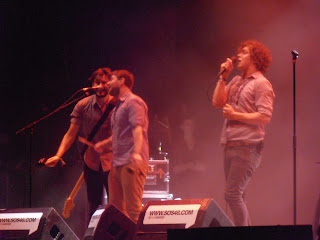 And Kiko Veneno’sshow was at its highest moment in the music hall stage, crowded with everyone standing, dancing, clapping and singing, specially with La Rama de Barcelona and En un Mercedes Blanco. It was an actual party with the fewest not-keen-on-spanish-stuff attendees.
Outside on the second stage Grupo de Expertos Solynieve could do nothing to keep their public there a stream of people walked to the main stage.
There you could see the green laser drawings and words -this time in Spanish- that are starring the beginning of Pulp’s gigs during his Reunion Tour. They started, of course, with Do you remember the first time? and went on with a hits-non-stop: Mis-Shapes, Razzmatazz, Pencil Skirt, Something Changed, Disco 2000, Sorted for E’s and Wizz, F.E.L.L.I.N.G.C.A.L.L.E.D.L.O.V.E., I spy, Babies, This is hardcore…. Even though years went by, Jarvis Cocker with his famous poses made the crowd shake to his music. They gig ended with Bar Italia and megahit Common People.
Reaching the last minutes of his performance, Jarvis Cocker even allude the loud beat coming right from the second stage… Well they where local band The Leadings that gave their sound away to those that felt more like dancing to their neon electro clash rather than admire Cocker’s mythical band.
Back to the music hall and not too free from scepticism we sat down and gobsmacked watch the performance Enric Montefusco and Raül Fernández (leaders from bands Refree and Standstill) called Requiem. Perhaps a person that never saw a choir in action could be impressed by their work, but it was not –by far- a high magnitude art work. Anyway we value their giving a different format in their performance and the ambience any could enjoy there.
On the main stage again Gossip, from Washington, U.S.A., spread their style once described as “soul or gospel voice” with “a sort of funky punk soundtrack” with songs like Love Long Distance and Standing In The Way Of Control.
After this electro and dance took control of the festival with sets like Buraka Som Sistema, John Talabot DJ Set, Simian Mobile Disco DJ Set and The Zombie Kids.
Concerning SOS Club, we must highlight the performance by Yelle DJs (DJ Set) that seemed more of a gig on a stage than a DJs session.
They insatiable ones could beam night and daytime in the OFF FESTIVAL (Sala Teatre).
SATURDAY
18:00 Oso Leone Escenario Jägermeister
19:00 Parade Escenario Jägermeister
19:15 YuckEscenario Estrella Levante
20:10 Antònia Font Escenario Jägermeister
20:30 Bigott / Grupo AIE en Ruta Escenario Estrella Levante
20:45 Matthew Herbert : One Pig Auditorio Mondosonoro.com
21:25 Klaus & Kinski Escenario Jägermeister
22:15 Mogwai Escenario Estrella Levante
22:55 Delorentos Escenario Jägermeister
23:30 Miqui Puig y la Original Jazz Orquestra (OJO) del Taller de Músics Auditorio Mondosonoro.com
00:15 The Flaming Lips Escenario Estrella Levante
00:15 El Columpio Asesino / Grupo AIE en Ruta Escenario Jägermeister
02:00 La Casa Azul Escenario Jägermeister
02:15 Love of Lesbian Escenario Estrella Levante
03:30 CSSEscenario Jägermeister
04:00 Feed Me DJ Set Escenario Estrella Levante
04:45 YALL Escenario Jägermeister
SOS Club by Ron Brugal
12:00 Angelpop 13:30 Daniless 15:00 Virginia Diaz
16:00 Tomás Fernando Flores 17:15 Electric Gramophone
18:30 Thug Ladies 19:45 Meneo live
20:45 Pional live 21:45 Kosmos
23:15 2PIASDJs 00:30 Mathew Herbertt DJ Set
02:00 Brodinski 03:30 Fuck Norris
04:45 Cupcake
OFF FESTIVAL (Sala Teatre)
06:30-07:45 Cansei de Ser Sexy (CSS) DJ Set
07:45-09:15 Eme
09:15-10:30 Cardopusher
10:30-12:00 Fuck Norris
12:00-14:00 Iván Serra
14:00-16:00 Dubpaper
MURCIA SOS 4.8 2012 MUSIC FESTIVAL REVIEW