Skip to content
No Comments on Brendan Benson @ Madrid Moby Dick Club 18 May 2012Posted in BRENDAN BENSON, MADRID, MAY, MAYO, MOBY DICK CLUB By adminPosted on May 19, 2012
Not too many people at the entrance of the venue even though it was 9 pm, opening time, and the small – though nice – look of the location suddenly reminded us the low level of acceptation for these great artist by the Spanish music consumers.
As we entered first in the line we had time to check the stage, at the height of one’s knee, the guitar pedals, instruments, guitars, keyboards, drums… and the setlists themselves on the floor (No surprises from Barcelona’s previous day set, where they chose Pretty Baby as show closer, instead of What Kind Of World). Everything was ready for Brendan and looked like no supporters were to play there.
But the show was warmed up by Young Hines, who is produced by Brendan and works for the same Readymade Records label as Brendan does… And most important he is a friend his. The explanation of the stage as it were for Brendan’s band is that Brendan’s band is the one to play with Young Hines. He sounded from noisy grunge, megaphone in – a friend’s hand- to rockabilly but powerful all the time and really was appreciated by the attendants. After the gig he did not hesitate go to the merchandising stand to greet his fans.
And a few minutes later “Mr. Folk Singer” Brendan Benson got onstage with –again- his band.
After greeting in Spanish, and no surprises, they started over with Light of the day. Like every gig with a certain level, the beginning was even more powerful than the previous show by Hines.
And this has become a golden rule: whereas the first must hit, the second song in the set must re-hit. And it did. Good to me was even more powerful especially the chorus by both guitarist/keyboarder/back vocals and bassist.
Then came a song introduced by Brendan as a “cover”. It was Hands, by the Raconteurs, band that yet not end up is living a nearly long latency. As the songwriter said it was a cover of this song that represents the two-faced sound of the Raconteurs, two first minutes melodic and soft and two other complex and twisted –even darker- in Jack White’s style.
Sitting pretty, but for the backing vocals by the guitarist doubling Brendan from time to time, we missed all the vocals in the song especially that one saying “I can’t breath!”.
Brendan asked for the megaphone that was used by Hines before –no seriously of course-. It was the turn for Cold hands. It sounded very emotional and was very clapped by the public.
One of Brendan a song with the highest number of version, Metarie, came in one of its most popular versions, where the guitarist has to do the female back vocals.
Garbage day, was really good but even though strings were played by the guitarist/keyboarder didn’t have so many ornaments and didn’t fulfil the song as in the album (god bless, because it looked like the studio had hired a philharmonic orchestra or something).
Bad for me, was just great, but the public clapped in advance and Brendan agreed and said it never ends and when you think it’s over there is one more phrase. We do not agree, Brendan, that part is to be there. People must learn your songs better.
From The Alternative To Love album, What I’m looking for was not one of the strongest by the American author. Specially during this song we witnessed forgotten lyrics –for keyboarder’s laughs sake- chords in the wrong place.
But to solve the problem, A whole lot better came to show why it is one of Benson’s most wanted songs. The guitar at the beginning intro by Brendan himself was just awesomely played.
For Keep me Young Hines’ presence on the stage was claimed by the band. Hines’ back vocals where very good, but the drum fill in gave the drum player “A score” for the night.
What kind of world to soon for what we were expecting but cover the place with its innovating and dark sound.
It was followed by Crosseyed, and that is why we thought they could have mistaken the order, but it was played very solemnly and deserved the show main part closer.
As we knew, after a not too long break backstage with Hines they played encore.
They played an improvised song with Hines, mostly in “vocal style”,  Tiny Spark, and Pretty Baby with awesome back vocals by Hines.
Even though the location was not the best, a very good night and an excellent chance to see Brendan Benson live. 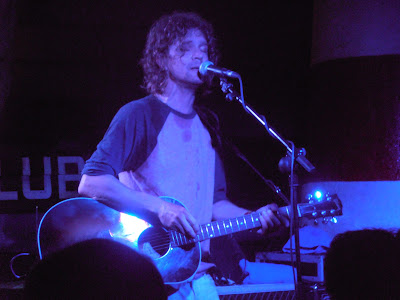 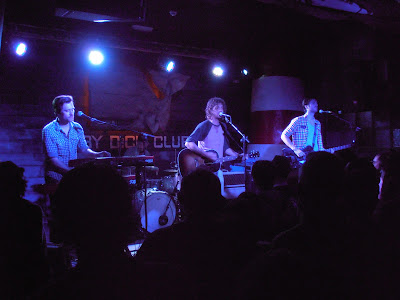 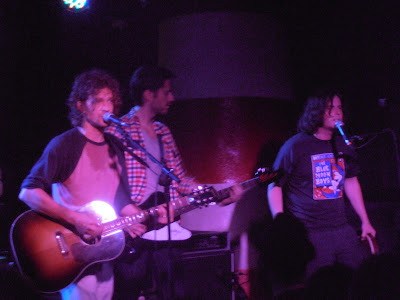